Crabs In A Barrel 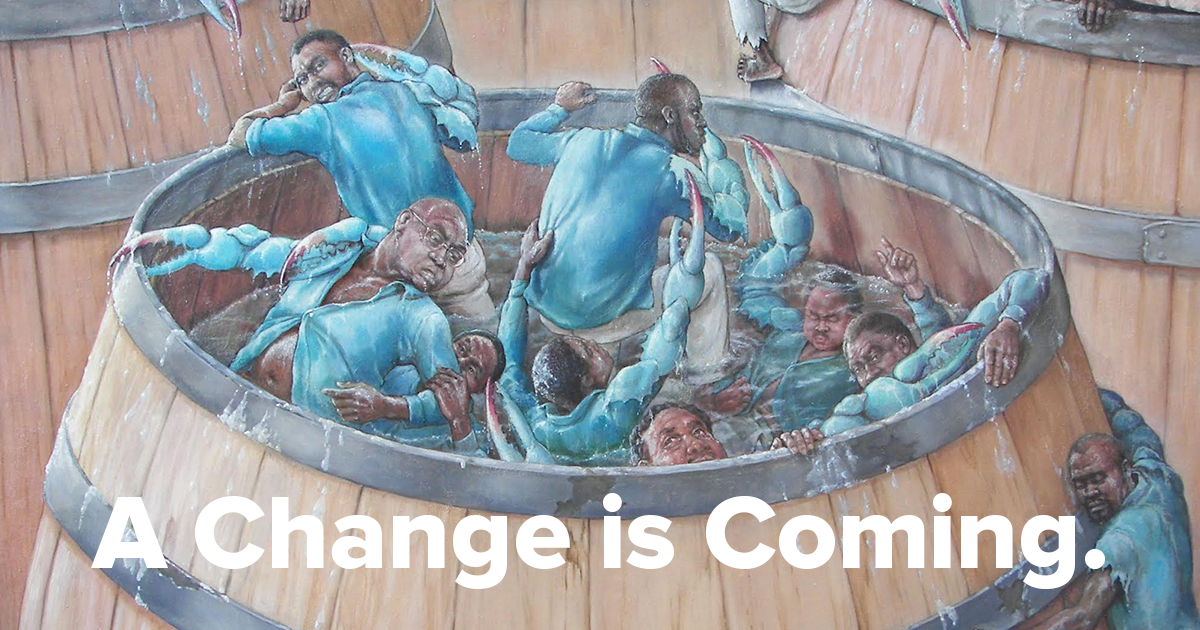 Not enough of us are raising our concerns about the disproportionate and increasing numbers of black men and other vulnerable groups within the prison system in a unified way. The figures are staggering – the ethnic minority prison population has doubled in a decade, a quarter of the people in prison now come from an ethnic minority community and Muslims make up 12% of the prison population.

The Labour MP Diane Abbott recently said of Labour’s time in Government, “ There was never a serious examination of the consequences of locking up a generation of young black men. The result is there are some prisons in the south east which are now virtually all black. Many are converting to Islam.” Most agree that prison as it currently operates, does not work and we are storing more fundamental problems for the future by not putting the resources into addressing these issues now.

Whilst there is much said at a community level about the numbers of our youths behind bars, the messages lack consistency and a robust community centric evidence base that statutory bodies are forced recognise and act upon. There is still clearly much to be done in regards to the development of strong community partnerships that will be taken seriously and listened to by the likes of Boris Johnson and the new Justice Secretary Michael Gove, both of whom we have taught to view black communities as divided and therefore ineffectual.

Those within government departments and quangos responsible for addressing these seemingly intractable issues, are often too far removed from those best placed to effectively deliver the solutions. For example, we all accept that mentoring is an important piece in the puzzle. Yet generic mentoring, which is often delivered through overwhelmingly ‘Guinness structured’ organisations that unwittingly or otherwise exploit inexperienced and poorly trained practitioners, often not long out of prison themselves, is a recipe for disaster. Too often, contracts are awarded based not on actual ability to deliver, but on the sheen emanating from the veneer of competence larger organisations are better able to project. Poor commissioning and a lack of understanding regarding the importance of capacity building community based assets are taking us further down the road with unpredictable consequences for us all.

There are also those within government and larger organisations who know better, but are not motivated to do better. These individuals remain muted when it comes to the question of race, inequality, disproportionality and abuse of vulnerable communities, as they fear the adverse impact that making any unwelcome utterances may have on their careers, mortgages
or relationships with their bosses.

This individual reticence, has an even greater adverse impact as a consequence of the pervading culture of compartmentalised professionalization that exists across government and perpetuates the fragmentation of commissioning that has persisted, despite the efforts of many to change things for the better. The newly formed Community Rehabilitation Companies are in competition with each other and therefore far less willing to share best practice than was the case under the previous structure. I am not arguing for a return to the previous model which has clearly been consigned to the pages of history. However, I am saying that if we are to address these worrying trends, serious thought must be given to the needs and impact of black offenders across the board, with consistency of approach across all departments and private sector providers (CRCs etc.).

Angela Clark, National Chair of the Association of Black Probation Officers echoed many of these points when she noted that, “ The awarding of probation contracts to a range of partnerships with little real understanding of the disproportionality debate can only mean that things will get worse at least in the short to medium term.”

“Those of us who have a responsibility to mitigate the risks of these disturbing trends to our communities have a responsibility and moral obligation to take up more of a community leadership role in terms of finding and sponsoring solutions and ensuring those in a position implement meaningful and lasting change actually do so. The ABPO now believes that it can only fulfil this role by engaging much more meaningfully with communities as well as our members and their employers.”

Our over-individualised and seemingly materialistic outlook on life often means that our black communities are often compared to crabs in a barrel by those outside and within the community, rather than as communities of interconnected and resilient individuals capable of coordinated action.

The Choice Consortium will be hosting a series of free events over the next year starting on July 23rd 6.30pm-9.00pm CAN Mezzanine 49-51 East Road London N1 6AH, to help individuals and community orgs get access to information, and resources that will facilitate the types of partnerships that will make the difference that we all want to see. More information at: https://www.eventbrite.co.uk/

Viv Ahmun: is part of the Choices Consortium and has been involved in the forming of social policy at a national and community level for nearly 30yrs.